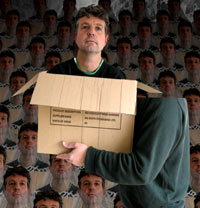 Peter Ulrich was born in Perivale, west London in 1958. He struggled through a couple of years of formal piano tuition, and never showed any particular aptitude for music at school, but became inspired when his grandparents returned from a holiday in South America and presented him with a pair of clay and calfskin bongo drums when he was about 10 years old.

These bongoes remain a treasured possession to this day, and feature in the track ‘Kakatak Tamai’ on the ‘Enter The Mysterium’ album. They inspired an early interest in African tribal drumming, as well as leading Peter to take up playing a conventional rock drum kit. Through his teenage years, Peter taught himself to play drums as well as some elementary acoustic guitar, but early attempts to launch a group never made it beyond the rehearsal studios.

It was not until after graduating from college and settling in east London in 1981 that Peter answered an advertisement and joined an established soul/blues band which played the local pub and club circuit. The group rehearsed and gigged regularly which was great fun and valuable experience, but had no illusions of progressing beyond the local scene. At the same time, Peter was discovering Joy Division on the one hand, and the ‘world music’ scene through the birth of WOMAD on the other – and developing a deep love of both.

When Peter met Brendan Perry and Lisa Gerrard in late 1982 and first heard the music they were creating as Dead Can Dance he was thrilled to discover elements of both these areas contained in a very dynamic and exciting new sound. Initially his enthusiasm on being invited to join the group was tempered by a fear that he was out of his depth and technically inadequate, but Brendan and Lisa were happy to have discovered a kindred spirit and patiently initiated him into their set-up.

Peter played drums and percussion with Dead Can Dance until his second daughter was born in 1991 and this, coupled with other family and work commitments, made it impossible for him to continue touring. Nevertheless, in 1995 he was invited to Ireland to participate in preliminary percussion sessions for the ‘Spiritchaser’ album, during which period Brendan offered him the opportunity to record material for a solo album at the Quivvy Studio. Although it took over a year to organise, the recording sessions took place in early 1997 and the resulting six tracks were added to two tracks previously recorded in 1990 to complete Peter’s debut solo album.

‘Pathways and Dawns’ was released on Projekt in August 1999, gathered a clutch of very good reviews, and began the process of establishing Peter’s own audience.  His second solo album, ‘Enter The Mysterium’ was released on City Canyons in March 2005 and includes a track called ‘Through Those Eyes’ which features both Peter’s daughters for the first time – a momentous event