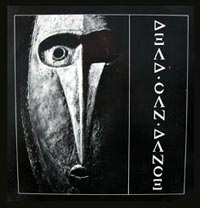 Peter Ulrich met Brendan Perry and Lisa Gerrard shortly after they arrived in London from Melbourne in1982 in search of a record deal for Dead Can Dance. They needed a drummer and invited Peter to join. By the middle of the following year, Dead Can Dance had signed to 4AD and was in the studio recording the first album.

Peter played drums and percussion on most of the first album, the ‘Garden of the Arcane Delights’ EP and the two BBC John Peel radio sessions, and made percussion contributions to the ‘Within the Realms of a Dying Sun’ and ‘Spiritchaser’ albums. He also played on all but one of Dead Can Dance’s concert tours until the end of 1990.

Being a part of Dead Can Dance was a fantastic experience for Peter which had a huge influence on his own musical development. Brendan and Lisa gave him great encouragement and inspiration, and without Brendan’s help he would not have been able to launch his solo career.