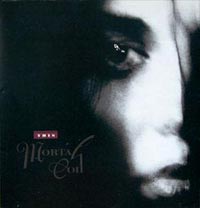 One day in 1986 Peter Ulrich and Robert Lee (then sound engineer with Dead Can Dance and member of The Heavenly Bodies) decided on a whim to make an impromptu recording in Robert’s flat on the Isle of Dogs in London.

Peter gathered a few drums, a cymbal and a clay ocarina and Robert set up his Tascam 8-track reel-to-reel tape recorder. Using only the natural reverb in the bathroom, Robert recorded Peter as he built up seven layered percussion tracks topped with the ocarina part, composing as they went along. The root drum sound was given its impact by mic-ing the end of an African barrel drum inside the bowl of the toilet, a walking stick deputised as a woodblock, and a big crash in the middle of the piece was created by smashing a milk bottle in the bath with a club hammer.

The end result was a track called ‘At First, And Then’, a short piece characterised by a gentle opening giving way to a pounding, frantic finale, reminiscent of a grazing herd of cattle which is startled by a hunter’s shot and stampedes for safety. Peter played the piece to 4AD label head Ivo Watts-Russell who was compiling the second This Mortal Coil album at the time. Ivo and John Fryer transferred the original recording to 24-track at Blackwing Studios in London, added the guitar loop, and included the piece on the ‘Filigree and Shadow’ album.

An extended version of ‘At First, And Then’ was subsequently used by Dead Can Dance as a live set closer on two or three tours, with all members of the band playing percussion. The basic structure of the piece (i.e. a multi-layered percussion piece with a slower opening giving way to a dramatic second part) was returned to and further explored by Peter in the track ‘Evocation’, written and recorded in 1990.